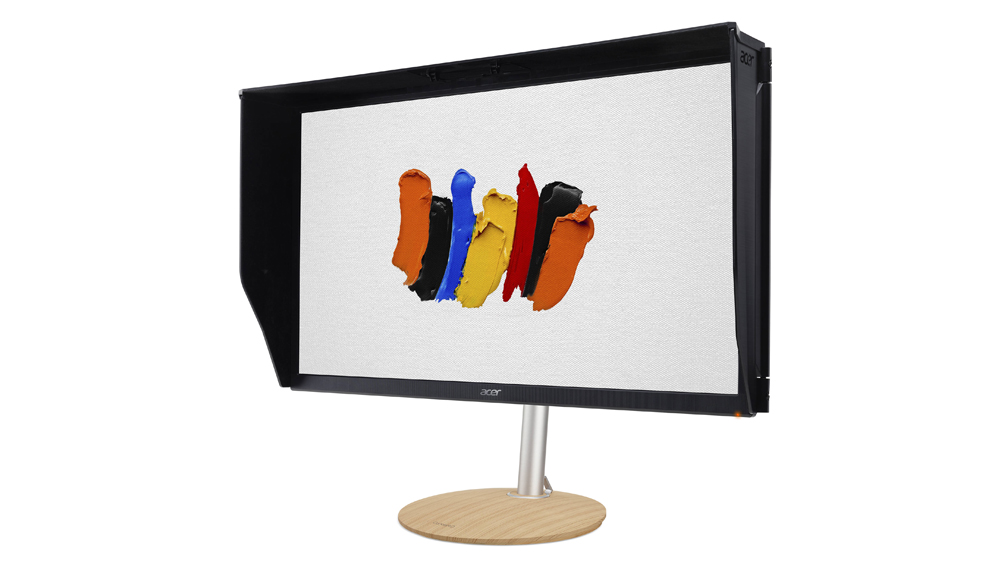 A screen that accurately displays images is reassuring and indispensable. The 27″ Acer CP7271K is a 4K (3840×2160) UHD IPS panel display has a delta E of <1, refresh rate of up to 144 Hz, and a 99% Adobe RGB color space, which all adds up to being ideal for demanding graphic designers and photographers. At $2,199.99 ($1,699.99 at B&H Photo), the display is relatively expensive, and the onscreen manager (OSM) control panel menu needs some work to clarify key calibration terms.

Setting up the CP7271K is straightforward. The round base has a faux wood veneer, the support arm is brush metallic, and the non-glare screen has a thin black bezel. The OSM control panel, usually found in the lower-right front of the bezel for ease of access, is instead positioned on the back in the lower-right side. The 5-button control panel includes a 4-way navigator to peruse the menu. The control panel is graphically represented on the screen, making it easy to reach around back to locate the correct button.

The display comes with a hood to block stray light and prevent screen glare, which can help to accurately judge an image. On top of the hood is a trapdoor in which to pass a colorimeter or spectrophotometer to the screen surface when calibrating.

The screen’s movements are smooth, but limited to rise and fall and tilt back and forth. There’s no swivel from side to side, and no ability to orient to a portrait position. I found the angle of view to be approximately 150°, less than the claim of 178°. Angle of view is of concern when the screen is used in a group setting with people off to the side or looking down, hoping to see the same colors, saturation, and illumination as the person directly in front of the screen. The connectivity includes HDMI, USB 3.0, a Display Port, and 4 USB 3.0 downstream ports.

I calibrated the screen with a Spyder5Elite using Datacolor’s latest software. My standard target settings are a temperature of 6500° K, gamma 2.2, and brightness of 120 candelas. These settings are based on printing to a luster type paper. It’s common during calibration for the software to stop processing and ask the user to adjust the displays’ settings to help achieve the selected target settings (a typical example is adjusting brightness). Usually, the brightness measurement is in candelas; however, Acer uses nits, which is fine, as 1 nit = 1 candela.

The CP7271K display’s menu can be unclear on other relevant terms, though. For example, values for temperature are listed as warm, normal, and cool—rather imprecise, especially for precision-minded professionals. According to an Acer representative, “warm” equals 6500° K, “normal” 7500° K, and “cool” 9300° K.

Another issue I had is that, instead of clearly listing Gamma 2.2 and Adobe RGB 1998 in the menu, they’re referred to as ”default.” How would the user know that? For clarity, I think it would be easier to replace the term “default” with an exact meaning, thus leaving no doubt in the end-user’s mind.

Lastly, Acer says the CP7271K Display has a built-in LUT (look-up table) that, theoretically, will give the user a more precise calibration than using the LUT built into your computer’s graphic card. Essentially, it’s what the calibration software writes and where measured colors/values are stored and then looked up to give the end user the color value they want. In my experience, when a LUT is built into a display, the user accesses it via the manufacturer’s proprietary calibration software; however, Acer didn’t include any software, and I was told that the CP7271K’s built-in LUT isn’t available to the end user, leaving me confused and unclear as to its use.

Once the display was calibrated, I printed a standard test target, and the resulting print matched the screen for color, B&W tonal values with good midtone separation and, thanks to its UHD resolution, beautifully smooth gradients. Particularly of note were the detail in both shadows and highlights with no blocking up. I measured the illumination and color temperature across the screen, and it’s uniform edge to edge.

The Acer CP7271K is an expensive display, capable of delivering precision colors and image detail, and it’s a shame to stumble because of using vague nomenclature in a world of precision settings. ■