The Prime Portrait: The Difference Between f/2.8 and f/1.4
by Tom Bol My lens assortment has grown and evolved throughout my career. I started with all prime lenses, as they were optically superior during that time. But zoom quality improved, and I started using two main lenses: 24–70mm and 70–200mm, both f/2.8. Optically, they were sharp, and the convenience of zooming through the focal lengths was terrific. Every five years or so, a sharper, quicker auto-focus version would come out, and I’d be first in line to upgrade. With these two lenses, I was good to go.

But reviewing images after assignments and travel workshops, I realized I was missing something. I longed for the silky, soft bokeh that only a fast prime could produce. Wouldn’t my f/2.8 zoom lenses produce about the same quality of bokeh as f/1.4? Would using a fast prime lens for my portrait create a better shot?

Obviously, there are a lot of differences beside maximum aperture between zooms and primes. Size, weight, cost, sharpness, and focal range all come into play when deciding which lens to use. But one simple fact remained: Most of my prime lenses were two full stops faster than my zooms, and this would affect background quality and image separation; but by how much.

I really wanted to focus on bokeh quality at different apertures for this shoot. With that in mind, I decided to use a selection of prime lenses at f/5.6–f/1.4. I also wanted to see what other advantages or disadvantages might crop up between apertures. I chose an alleyway with lots of depth to best illustrate bokeh differences. We were shooting in mid-morning light with bright sun overhead. Every photographer knows that bright sun isn’t ideal for portraits, so to deal with the harsh light, we broke out one of my favorite lighting accessories, the Sun-Swatter (made by California Sunbounce Pro). The Sun-Swatter is a 4×6’ overhead diffusion panel that can be held easily and maneuvered by one person. Even in windy conditions, this scrim is terrific for producing beautiful soft, diffused light. We placed our model, Katrina, in the middle of the alley with rows of flowers and light posts behind her for the first image. I started shooting at f/1.4 using my 85mm. This lens is one of my favorite prime portrait lenses, and looking at the LCD, I was elated to see the painterly quality of the background shooting at f/1.4. I was using my Nikon D500 in aperture priority mode for the images. I started to change aperture settings, shooting at f/2.8, f/4, and f/5.6. 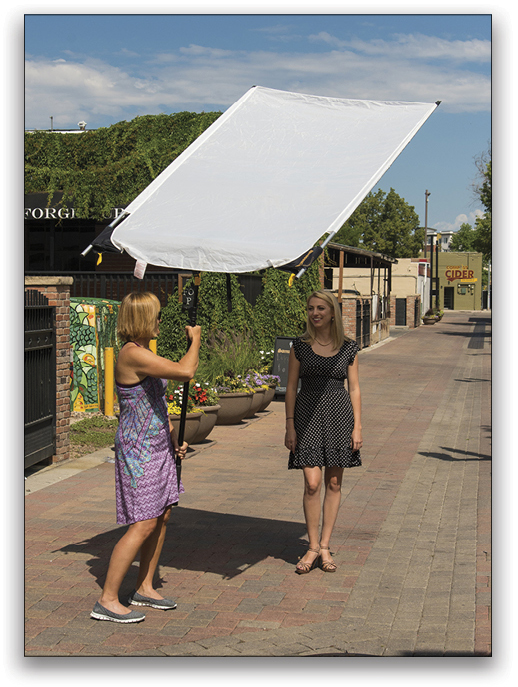 Hands-down, the mood, quality, and separation of f/1.4 were preferable to f/5.6. But when comparing f/1.4 to f/2.8, there was less difference. The f/2.8 version had a little more detail, but what I really noticed was the bokeh quality. The f/1.4 image looked softer and a better choice for a flattering portrait. Since I was shooting in available light using the Sun-Swatter, changing exposures was easily accomplished by simply changing the aperture setting in aperture mode. But my shutter speeds were around 1/3200. Shooting flash was going to require some special techniques. 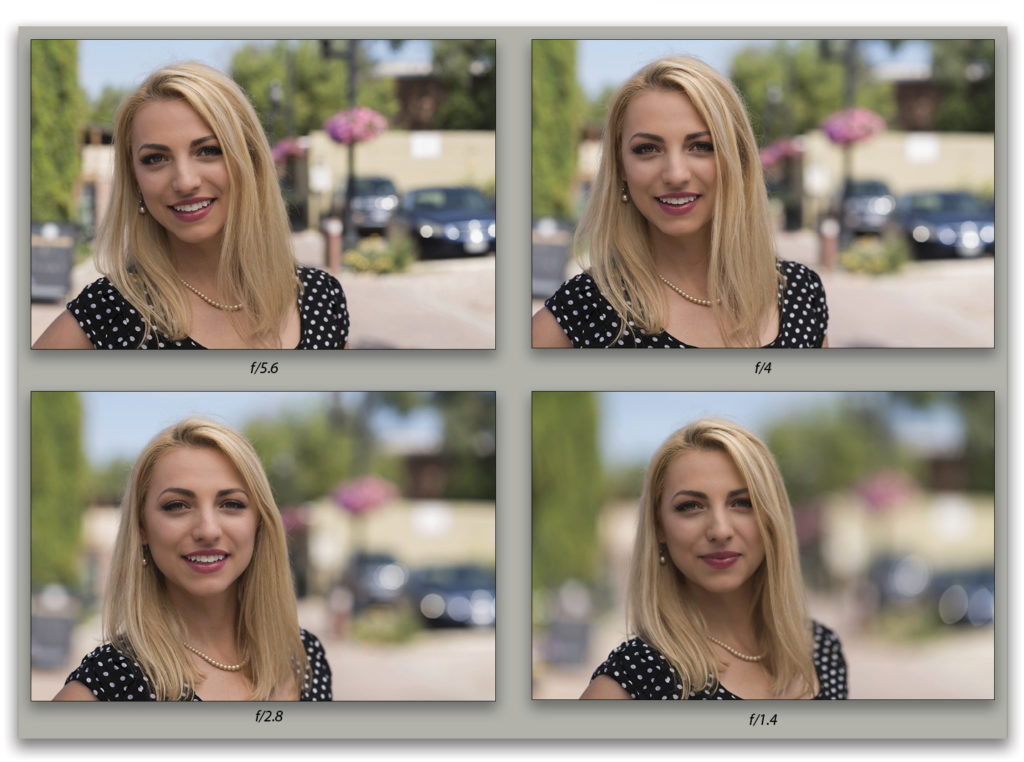 To further explore the prime lens question, I decided to photograph Katrina using a 30” FourSquare softbox and a 50mm f/1.8 prime. The FourSquare box allows up to four speedlights to be used; I used three Nikon SB-5000s with dome caps attached inside the softbox. The dome diffusers spread the light throughout the softbox for clean, even lighting when the flash exits the softbox. I attached my WR-R10 radio transmitter to my D500. Using this radio transmitter, I didn’t have to worry about line of sight to my flashes, or interference from the sun. Using a variety of apertures with the softbox, once again I discovered shooting at f/1.8 was preferably to shooting at f/2.8. Even though there was just over a one-stop difference, the background looked better wide open. But is this enough to justify paying big bucks for a prime? I wanted to try one more scenario before I made my decision. Speedlights have approximately 60 watts of power, so using three SB-5000s roughly equates to 180 watts of power. I wanted more power so I could use a larger softbox and underexpose the ambient light for better separation. For this task, I set up my Elinchrom ELB 400 (using a Quadra HS head), specifically designed for Hi-Sync photography. Unlike HSS, which uses a strobic flash mode, Elinchrom Hi-Sync retimes the shutter and flash pop to ensure flash at very fast shutter speeds. I’ve found that by using this setup, I can shoot at 1/4000 with beautiful light on my subject. I attached a 39” Elinchrom Rotalux Octa softbox to the HS head, and used the Elinchrom EL-Skyport Plus HS transmitter to trigger the strobe. I switched up lenses again, this time using a 35mm, f/1.4 prime lens. We moved locations to another alley with gritty brick walls to illustrate changes in bokeh. Once more I photographed Katrina using apertures from f/1.4–f/5.6. One difference for this shot was that I underexposed the background by one stop, which further emphasized the separation shooting at different apertures. I made an interesting discovery using a wide-angle prime at f/1.4: Shooting wide open made a bigger difference when compared to the other prime lenses in my testing. Why? Because more of the background was visible behind the subject, and changes in depth of field and bokeh were more obvious. In other words, the background made up more of the image using a wide-angle lens. I liked the f/1.4 images much more than I did the f/5.6 shots when shooting with a wide-angle prime lens. Combined with the softer quality of light using the larger softbox, these images were my favorite from the shoot. 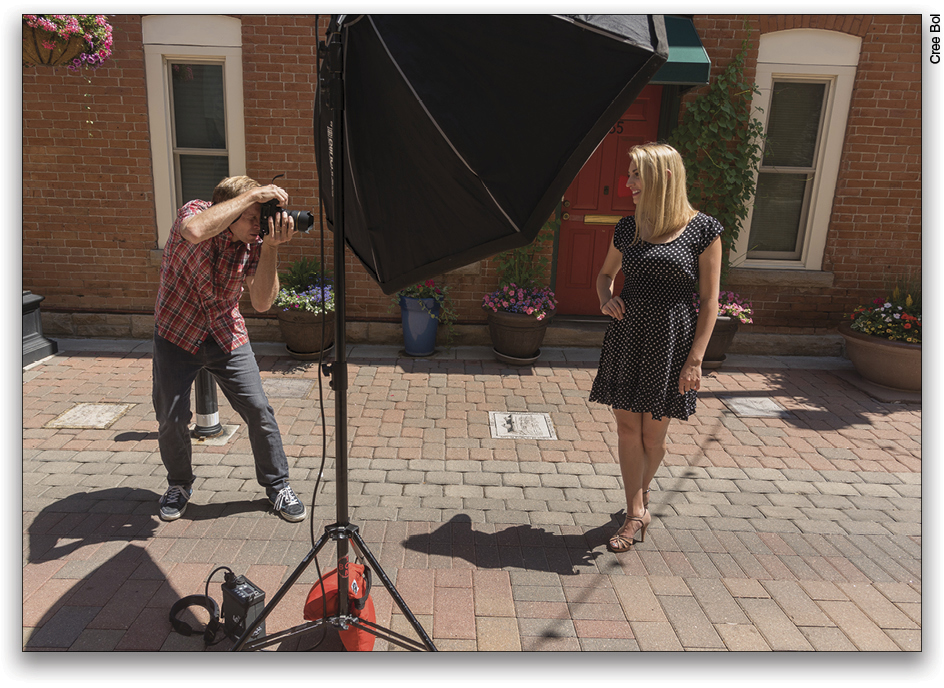 Another point became very obvious during this shoot: Photographing at f/1.4 requires perfect focus technique. I needed to put my focus point right on my model’s eye; otherwise, I would have soft images. If she wasn’t facing the camera, I knew one eye would be slightly softer than the other. Shooting tight with an 85mm, my subject’s eyes were sharp while her nose and ears were slightly blurred due to the extreme shallow depth of field. Do you really need that f/1.4 prime lens for the best portrait? The answer is, “It depends.” Based on my testing, I found I really preferred the bokeh using my 35mm wide-angle prime at f/1.4 compared to f/5.6. Using my 85mm prime at f/1.4 vs. f/5.6, there was also bokeh difference; but with less background visible at 85mm with tight head shots, I’d probably be just fine using my trusty 70–200mm shooting at f/2.8. Yes, I like the bokeh better at f/1.4 using my 85mm, but investing in this prime lens if you already owned a 70–200mm f/2.8 might make you pause. On the other hand, if you like shooting environmental portraits, I really preferred the bokeh at f/1.4 using the 35mm prime, and purchasing this lens was an easier choice for me. Another point worth mentioning is that f/1.8 primes are almost $1,000 cheaper than their f/1.4 counterparts. There’s only a 2/3-stop difference, which means there won’t be much difference in depth of field. But not all bokeh is equal, and individual lenses produce different qualities of bokeh.

As photographers know, depth of field and bokeh are just one part of getting a great portrait. Cameras, lenses, and flash are tools that help bring our vision to reality. Subject, location, rapport, and emotion are also critical aspects of good portraiture. But now that I own a couple of prime lenses, I can’t blame my equipment for a bad shot. It’s up to me to create the evocative portrait of my subject.

This article originally published in issue 32 of Lightroom Magazine.