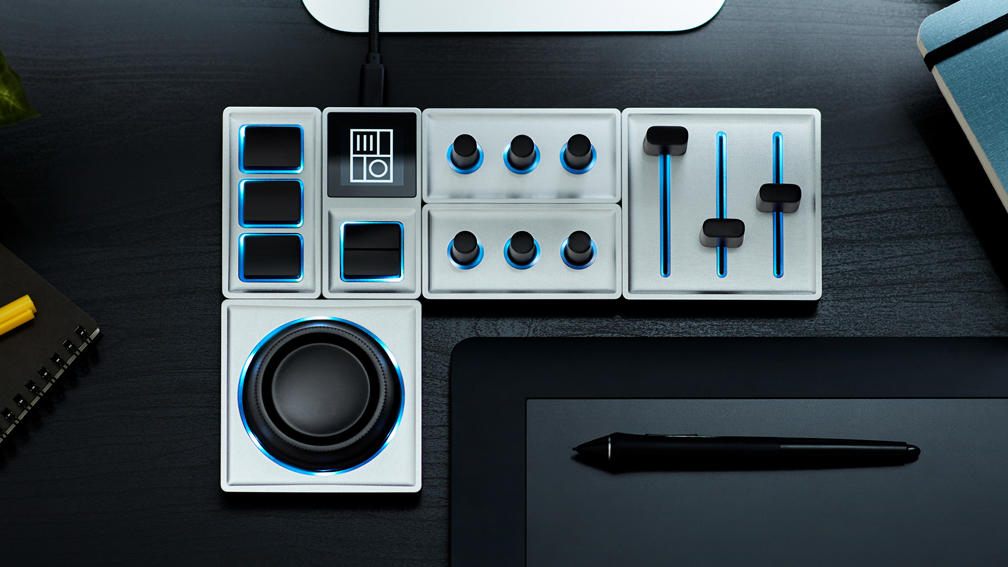 Monogram (formerly Palette Gear) introduced its next evolution of modular hardware controllers in late 2020. What sets Monogram apart from other hardware controllers is the ability to move physical components around to suit your environment and workflow preferences. This new offering takes the high-quality aluminum housing from the previous generation and adds updated style and controls.

Modules consist of sliders, knobs, buttons, and a new Orbiter module that brings a large shuttle ring and D-pad functionality, enabling 3D camera controls as well as features such as a color picker or panning the canvas.

Each module can be individually assigned one or more functions for a given application, and any supported application can have multiple profiles. For example, in Lightroom you may have one profile for working with the Library module and another for working with the Develop tools. Everything about the modules can be configured using the included Monogram Creator app (brand-new for this release). The Monogram Creator app also recognizes when you switch application focus, and automatically loads the default profile for that app.

Once a module has been assigned a function for a given piece of software, it retains that assignment even when disconnected and reattached. Strong rare earth magnets are used to snap the kit together, though they’re not strong enough to lift the entire assembly in one piece. The Monogram Creator app shows you a map of the current layout that updates in real time as you move components around. This makes it much easier to experiment with different configurations, or to take only a few pieces when traveling.

An impressive number of configurations are possible, including adding more components or paring down to bare essentials for a travel kit. Customizable LED halos can be assigned in the Monogram Creator software for visual identification, and the Monogram Core can display the current application’s icon or a custom graphic.

Using the Monogram Creative Console is an amazing experience. The hardware feels professional and solid and, within a few minutes, it becomes a natural extension of working with Photoshop and other applications. Knob, slider, and button modules come in a three-up configuration as opposed to the single-unit pieces featured on Palette Gear. Knobs can also be pressed down and have sufficient resistance to prevent accidental clicks. Similarly, the buttons have a great feel and are spaced apart to avoid hitting two at once.

A standout element is the Orbiter. In testing, we used the ring for zoom control in Photoshop, image highlighting in Bridge and Lightroom, and scrolling in other apps. Its size makes precision easy without giving up speed for tearing through large collections or many pages. We used the pad in Photoshop for panning while zoomed in, speeding up a typical retouching workflow by leaps and bounds.

Experimenting with different physical layouts is extremely easy; there’s no need to shut down the Monogram Creator app or to disconnect the core module. Simply remove a module and snap it into place elsewhere. During testing, we connected the original Palette Gear hardware and experienced zero issues; everything is immediately recognized. This is great news for those who bought the previous generation.

Control over Photoshop, Lightroom, and Bridge functions is very smooth and the Monogram Creator app almost instantly swaps between applications on the fly. Going from word-processing apps to Photoshop to web browsers to music production software presented no problem; so long as there’s a profile for the software you’re using, Monogram Creator will update quickly and precisely. Scrolling in Lightroom and Bridge was smooth with the Orbiter, and made the process of reviewing multiple images much easier than clicking back and forth.

Any computer-based task where you’re constantly working with value-driven functions for expression and control would get a serious boost from the Monogram Creative Console. It pairs especially nicely with a Wacom tablet, and can be quickly modified to sit on a MIDI keyboard for real-time expression control. The value in using external hardware is to enable better tactile feel and body memory so that the user is able to focus more on the task at hand than the interface, and this is where Monogram Creative Console kits excel.

There are three kits available, ranging from $399 to $799, or individual modules can be purchased from $99 to $149. Each kit ships with a USB-C cable, and the Monogram Creator software can be used with Windows or macOS. ■